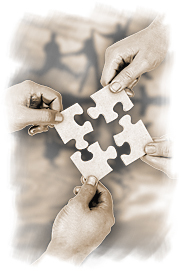 Perfect Word conducted a survey asking about Yeshua-believers’ interaction with one another on three levels: congregationally, in small groups, and outside organized meeting environments (simple fellowship). The purpose of the survey was to determine the nature and character of interpersonal relationships within the Body of Messiah. 113 respondents (comprising 42 men and 71 women [almost 50% more]), of whom 27% are Jewish, participated in the survey.

Not surprisingly, the highest level of interaction between believers as a whole takes place in the context that facilitates the lowest level of interpersonal relationships: congregational services.  About 2/3 (60%) of all respondents reported service attendance at least weekly, which may, in and of itself, indicate only a moderate overall commitment even to such nominal interaction.

Conversely, at exactly the same rate, respondents reported the lowest level of interaction in the context that facilitates the highest level of relationship: simple fellowship. Again, almost 2/3 (60%) of all respondents have no fellowship with believers outside services or other meetings on a weekly basis. This, of course, is in stark contrast to the standard of daily fellowship as exemplified in Acts 2:46, especially considering that only 4% of all respondents claimed to participate in daily fellowship with believers outside their family.

Small group involvement, however, offers a glimmer of hope, and some potentially illuminating insights. While only a little more than 1/3 (38%) of respondents participate in a congregation-affiliated small group (such as a Bible Study or cell group), another 1/3 (32%) are involved in independent small groups, including 12% in independent home fellowships. All told, this accounts for almost 3/4 (70%) of the respondents.  Though small-group type is diverse, the fact that more people are involved in small groups than in weekly congregational services could be an indicator that people desire closer, interpersonal interaction, and need only to be encouraged in it.

While interaction at each level (services, small groups, simple fellowship) may have some amount of influence on the others, factors such as marital status, children living at home, etc. also appear to play a part. Involvement in independent groups, as opposed to those congregationally-affiliated, do appear to have lower rates of simple fellowship. This speaks to the need for independents to overcome the negative aspects of their independent-minded tendencies. Clearly, congregational organizations continue to offer a convenient framework in which people can more easily find places in which to comfortably fit. Independents need to not necessarily be more organizationally-minded, but more mindful of the organism that is the Body of Messiah, and eschew any idea that it is beneficial to walk alone.

In conclusion, if the results of this survey even slightly resemble the character of the larger Body of Messiah, there is a significant vacuum of fellowship among us. We are a fragmented, disjointed Body, and if we have any hope of adequately shining the light of Yeshua, we must overcome this glaring shortcoming.

1/3 (32%) of all respondents are involved in some kind of independent fellowship, separate from a congregational organization (20% in independent Bible Studies, 12% in an independent home fellowship).