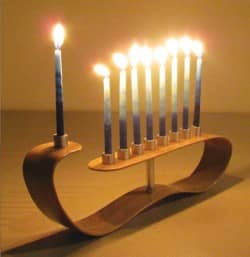 The most obvious and symbolic element of Chanukah is the ’chanukiyyah (commonly, though inaccurately, called the m’norah), used for the commemoration of the alleged miracle. The chanukiyyah is usually a nine-branched candelabra designed to hold eight Chanukah candles, one for each night, plus the shamash (meaning “servant”). In typical fashion, the shamash is lit, then used to kindle each Chanukah light in turn: on the first night, one light; on the second night, two; and so on, until all eight lights are kindled on the last night of the Festival.

The chanukiyyah, while apparently ancient, is not explicitly prescribed by the Rabbis. Neither is the use of candles as Chanukah lights. Indeed, most of the Talmudic references are to oil lamps. For example, Mas. Shabbath 23a, discusses which kind of oil is best for kindling the Chanukah lights (evidently, it’s olive oil).

But what is truly intriguing about the traditions surrounding the chanukiyyah, is that the most common method used today for kindling the Chanukah lights was originally meant only for the “extremely zealous.” You may be surprised to know that according to Mas. Shabbath 21b, only one Chanukah light per household is “demanded,” and any increase in the number of lights is merely an indication of one’s “zeal.” According to the Rabbis, each household must light at least one Chanukah light per night; for the “zealous,” one light nightly for each member of his household; and for the “extremely zealous,” eight lights—with Beth Shammai saying to reduce the number by one each night, and Beth Hillel maintaining that the lights should progressively increase each night up to eight.

In short, there’s more than one way to kindle the Chanukah lights, and the traditions and rituals are not quite as fixed as we have been led to believe. END_OF_DOCUMENT_TOKEN_TO_BE_REPLACED 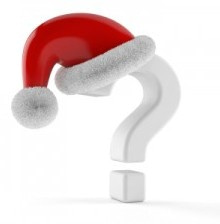 In my book about The Real Story of Chanukah, I included a lengthy endnote about Christmas. For those interested in one Messianic Jew’s opinion, here it is in its entirety.

Since this is a significant issue among Messianics and Christians in pursuit of the “Jewish roots” of the faith, I feel that it is worthwhile to offer my perspective on Christmas. Personally, I have no problem with Christians celebrating Christmas. For sure, there are seriously pagan issues with the holiday and its accompanying icons (these facts are widely documented, and, since this is a book about Chanukah and not Christmas, I do not feel compelled to elaborate here), but as far as the Luke 2 tradition is concerned—where the sole and central purpose of celebrating Christmas is the recognition of Yeshua’s birth—I have no problem with it whatsoever.  END_OF_DOCUMENT_TOKEN_TO_BE_REPLACED

“A blogger writes about how one of Judaism’s holiest days ended, for her, in a strip club, while elsewhere a guy strolls into a tattoo parlor requesting a Star of David. Two women exchange wedding vows in a Jewish ceremony, and hipsters toss back bottles of HE’BREW, The Chosen Beer…. [Moses] couldn’t have seen these Jews coming.”

This is how a CNN article begins, showcasing the so-called “New Jews” and the ways they express their Jewishness: with flagrant violation of Torah, and a heart ablaze for assimilation. They are “making [Judaism] and its culture work for them and others in a time when, more than ever, affiliation is a choice.” It’s an astute observation by Ms. Ravitz (the article’s author), and one that should make us shudder: it’s happening again—as it has continually since the beginning—Jews choosing… as if we had a choice. END_OF_DOCUMENT_TOKEN_TO_BE_REPLACED