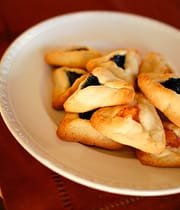 But with the voice of God sounding so loudly throughout the bulk of Scripture, His “silence” in the book of Esther rings ever so conspicuously where the authoritative establishment of Puriym is concerned. Indeed, it is absolutely clear from the text that Adonai in no way authorized and implemented Puriym as a feast to be kept by Israel. Rather, it is a self-appointed time of celebration—much like that of Chanukah, another self-proclaimed feast which commemorates Israel facing and defeating a similar foe. In the end, there can be no argument that Mordechai and the Jews in Persia unilaterally imposed the annual celebration and memorial of Puriym upon their descendants forever—an appointment which was never explicitly sanctioned by Adonai. How, then, are we to handle this precarious—and somewhat presumptuous—command, which has been preserved for us in the context of Scripture? END_OF_DOCUMENT_TOKEN_TO_BE_REPLACED