As Messianics on a quest for self-definition and the recharacterization of our faith, perhaps the most fundamental, core issue we face is that we too quickly and easily revert to religion, mistaking it for a tangible relationship with God. As such, when we demonstrate the fortitude to reject a given religion (i.e. Christianity, Judaism, etc.) in pursuit of a “true faith,” we find ourselves believing that whatever road we feel led to travel next (i.e. “Messianic Judaism,” Hebraic roots, et al) must therefore be the way to get to Him. This might be true, except for the fact that many of us have issues with shedding our religious tendencies, and more often than not, end up simply exchanging one brand of religion for another. END_OF_DOCUMENT_TOKEN_TO_BE_REPLACED

Q: Dear Kevin, my identity is in Yeshua, and this identity connects me to Israel. I am not Jewish by birth, but I am an heir to the seed of Avraham. So, as a Messianic Believer, should I convert?? Personally, I feel I should, but am seeking guidance on the matter. Shalom END_OF_DOCUMENT_TOKEN_TO_BE_REPLACED 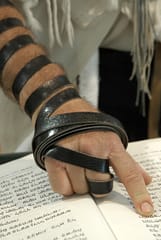 Most religions have their fair share of religious objects, icons and artifacts—and Judaism is no exception. Though some may consider the tabernacle elements such as the ark, the menorah, and the altar to be sacred symbols to all Israel, the ceremonial use of these articles was restricted to the priesthood, which more than likely limited their emblematic stature among the populace. Rather, it is the religious objects of later Judaism—both Scripture-based and contrived—that have become standardized icons to the Jewish people: the star of David, kippah, tallit, chanukiyah (the Chanukah “menorah”), torah scrolls, phylacteries and fringes. END_OF_DOCUMENT_TOKEN_TO_BE_REPLACED