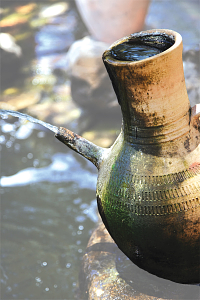 Yeshua, then, having been weary from the journeying, was sitting this way on the well… and there came a woman out of Shom’ron to draw water. Yeshua said to her, “Give Me something to drink…” The Shom’roniyt woman therefore said to Him, “How do you, being a Y’hudiy, ask for a drink from me, being a Shom’roniyt woman?…” Yeshua answered and said to her, “If you had known the gift of God, and who it is who is saying to you, ‘Give me something to drink,’ you would have asked Him, and He would have given you living water….” The woman said to Him, “Sir, give me this water, so that I will not thirst, nor come back here to draw water.” (John 4:6-15, mjlt)

The woman at the well didn’t have much going for her on that fateful day that she met the Messiah. The first strike against her was that she was a Samaritan, with whom Jews—like Yeshua—did not associate. Second, she was a woman, which made it that much less likely that a strange man would even speak with her. Third, she was tired from having to haul buckets of water from Jacob’s well the long distance to her home. And fourth, she was thirsty—wanting desperately to quench her thirst for good, yet having no earthly idea how to do it.

But being a tired, thirsty Samaritan woman was just the beginning of her problems. END_OF_DOCUMENT_TOKEN_TO_BE_REPLACED