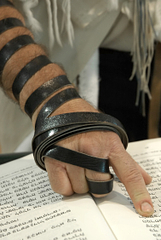 Most religions have their fair share of religious objects, icons and artifacts—and Judaism is no exception. Though some may consider the tabernacle elements such as the ark, the menorah, and the altar to be sacred symbols to all Israel, the ceremonial use of these articles was restricted to the priesthood, which more than likely limited their emblematic stature among the populace. Rather, it is the religious objects of later Judaism—both Scripture-based and contrived—that have become standardized icons to the Jewish people: the star of David, kippah, tallit, chanukiyah (the Chanukah “menorah”), torah scrolls, phylacteries and fringes.

We human beings tend to tie our spiritual identities to tangible images and symbols—and yet, should we not find this behavior strange in light of the fact that the God we serve is an invisible God? Indeed, He is “the King eternal, immortal, invisible, the only God,” and to Him may there be “honor and glory forever and ever. Amen.” (1Timothy 1:17) “For since the creation of the world His invisible attributes, His eternal power and divine nature, have been clearly seen, being understood through what has been made, so that [humankind is] without excuse.” (Romans 1:20)

Should we not, therefore, be satisfied with His creation as the crowning symbol of His greatness? Should we not be content to know His One and Only Son, the Messiah Yeshua, who is Himself the very “image of the invisible God, the firstborn of all creation”? (Colossians 1:15)

May we be a people whose identity is not inextricably bound up by symbols, icons and representations, but whose faith and walk is strengthened by knowing and following the manifest ways of our glorious and invisible God!

The Miraculous Story You Never Knew "Should I Convert?"
Scroll to top