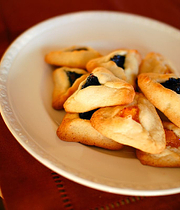 But with the voice of God sounding so loudly throughout the bulk of Scripture, His “silence” in the book of Esther rings ever so conspicuously where the authoritative establishment of Puriym is concerned. Indeed, it is absolutely clear from the text that Adonai in no way authorized and implemented Puriym as a feast to be kept by Israel. Rather, it is a self-appointed time of celebration—much like that of Chanukah, another self-proclaimed feast which commemorates Israel facing and defeating a similar foe. In the end, there can be no argument that Mordechai and the Jews in Persia unilaterally imposed the annual celebration and memorial of Puriym upon their descendants forever—an appointment which was never explicitly sanctioned by Adonai. How, then, are we to handle this precarious—and somewhat presumptuous—command, which has been preserved for us in the context of Scripture?

The story of Esther is not the first account in which the Jewish people faced atrocities at the hands of the Gentiles. Even before she became a nation, Israel’s future was severely threatened while she remained enslaved by Pharaoh in Egypt. Though Adonai clearly deems the Exodus story as a monumental and super-significant event, we can also see the incitive spirit of anti-Semitism weaved like a thread throughout the tapestry of Israel’s volatile history. When she was not destroying herself by following other gods and losing her own way, she was being squeezed by the nations—forced to worship and follow other gods and other ways, or face the sting of persecution and death.

Puriym is therefore akin not to the appointed times of Adonai, but to the historical events that have shaped Israel’s identity as a persecuted people. As a pre-Messianic-era event, Puriym is most like Chanukah—indeed, their historic similarities are compelling. But as just one more event in a long line of persecution-related narratives, Puriym joins a host of Jewish “histori-days,” such as the modern Yom Yerushalayim, which celebrates the retaking of the old city of Jerusalem during the six day war of 1967, ending the reign of Gentile rule over Jerusalem for the first time in two millennia. Puriym is, of course, unique, since it alone appears in the Hebrew canon of Scripture, but its themes reverberate through the annals of time.

Clearly, there is a call from Israel’s fathers to which the sons of Israel are obliged to hearken—a voice of instruction exhorting us to remember and “never forget” what has been done for us—and to us—as the chosen people. And yet, a most curious dynamic develops from this preoccupation with Jewish victory over Gentile enemies, and suffering at the hands of foreigners—and it is vividly portrayed in the way Puriym is presently celebrated in the Jewish community… a way that is in marked contrast to the divinely ordained appointed times of Adonai.

Israel’s annual calendar is most clearly outlined in Leviticus 23, which places Passover at the beginning of the year in early Spring, and Sukot (followed by Yom HaSh’miymiy ’Atzeret) at the end of the year in the Fall. For the remainder of the annual cycle—from around mid-October through March—no once-a-year appointments exist on Israel’s officially sanctioned calendar. Like the Land, it enters a time of winter dormancy until it emerges again with new life in the Spring.

It is in this wintry void that Chanukah and Puriym find their oddly upbeat voices—the former joyfully shouting “Draydl!” while the latter happily heckles Haman. At the very least, we should ask ourselves why—in a season without days designated by the Father—we are so quick to faithfully honor our ancestors’ incidental institutions. This is not so much a question of whether or not such remembrances should be observed, but to what degree we celebrate, innovate and emphasize; especially considering that our modern observances of Chanukah and Puriym are usually more soiree than substance—and almost always pursued and commemorated with greater zeal and grander spectacle than the days instituted by Adonai Himself. Surely, the remembrance of Jewish victories should be met with joy and celebration… but that doesn’t mean Puriym has to become the Jewish answer to Halloween any more than Chanukah should continue to reign as Christmas for Jews.

The Pur You Will Always Have With You

Over the course of any given year, there are many opportunities to remember significant events in our lives and the lives of our ancestors—and none of them require an edict from God. It is perfectly fine and normal to remember anniversaries of dates that mean something to us personally, and for our parents to ask (or even demand) us to remember dates that were important to them and their parents. But like everything in life, we are required to temper our perceived needs and wants with the instructions given to us by Adonai… and if our remembrances begin to rival those appointed to us by the Father, we put our present and our future in grave jeopardy. We are what we remember—this is why Israel was given appointed times in the first place: so that we will remember Adonai, and we will be only who He wants us to be.

So this year when you celebrate Puriym, and you’re decked out in your Puriym costume, wildly swinging your grogger, and stuffing your face with Hamentashen, check yourself: do I put this much effort—and more—into all the days that Adonai has designated for remembrance? Remember your heritage and the history of our people with joy, but don’t forget the One who set you apart and made you for a purpose… a purpose far greater than parties, performances and pastries…