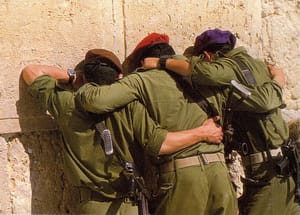 At the center of the Arab-Israeli conflict in the Middle East is a fundamental, socio-religious ideology that says Jews should not exist—anytime or anywhere—much less as occupants of the land presently known as the modern State of Israel. As a result, the Israeli State faces a constant and seemingly imminent threat to her national sovereignty and safety: Palestinian rockets and mortar shells launched almost daily toward Israeli territory; powerful Arab leaders with potential nuclear capabilities calling for the annihilation of the “Zionist regime;” escalating, internal conflicts within neighboring countries threatening to destabilize the entire region; the nations of the world continually demonizing every attempt made by the State of Israel to defend against her aggressors. Confronted by such contempt and antagonism, the government nevertheless tries to negotiate land for peace, with an Israeli/Palestinian two-state solution looming as inevitable. Yet the real and growing danger hanging over the State of Israel endures. END_OF_DOCUMENT_TOKEN_TO_BE_REPLACED