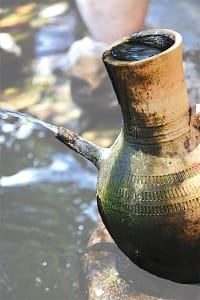 Yeshua, then, having been weary from the journeying, was sitting this way on the well… and there came a woman out of Shom’ron to draw water. Yeshua said to her, “Give Me something to drink…” The Shom’roniyt woman therefore said to Him, “How do you, being a Y’hudiy, ask for a drink from me, being a Shom’roniyt woman?…” Yeshua answered and said to her, “If you had known the gift of God, and who it is who is saying to you, ‘Give me something to drink,’ you would have asked Him, and He would have given you living water….” The woman said to Him, “Sir, give me this water, so that I will not thirst, nor come back here to draw water.” (John 4:6-15, mjlt)

The woman at the well didn’t have much going for her on that fateful day that she met the Messiah. The first strike against her was that she was a Samaritan, with whom Jews—like Yeshua—did not associate. Second, she was a woman, which made it that much less likely that a strange man would even speak with her. Third, she was tired from having to haul buckets of water from Jacob’s well the long distance to her home. And fourth, she was thirsty—wanting desperately to quench her thirst for good, yet having no earthly idea how to do it.

But being a tired, thirsty Samaritan woman was just the beginning of her problems.

When Yeshua offered her “living water,” she was certainly interested, but she wanted to receive it according to her own expectations. The problems in her life that she wanted solved were tied to her present circumstances and self-image—she didn’t want to be thirsty or tired anymore, and saw “living water” as a quick and painless way out.

It is at this point that one might expect Yeshua to tell her the “good news”: that all she needs to do to receive this “living water”—and thereby solve the problem of her self-image and circumstances—is to accept “the gift of God,” and believe that Yeshua is the Messiah. But instead,

Why would the Master do this? Why didn’t He just go straight to the part that says God loves her, and that now, by giving her life to Him, she would never thirst again?

Because that’s not the way it works.

Yeshua, rather than simply offering Himself as a salve for the struggles in her life and a promise of the life to come, did what was necessary: He looked past her complaints and dissatisfaction with life to expose the root of her greatest problem—the problem we all share in common—sin. Yeshua’s concern was not solving her problems—real or perceived—but to deal with the one issue that would truly keep her from drinking that “living water.”

Sadly, the “good news” that we have been indoctrinated and inundated with today is the same “good news” that the Samaritan woman may have been expecting, yet it can never overcome the problem of sin. It appears to go deep beneath the surface because it touches our emotions, but in fact, it does not have the power to change… or save.

It was the revelation of her own sin that awoke the Samari­tan woman to the reality of the Messiah, causing her to leave her jug and run to the men of the city proclaiming, “Come, see a man who told me all things—as many as I did” (John 4:29, mjlt)! The revelation of sin is the integral part of the message of the Good News, and like our Master, we must expose it to the light. Indeed, only in this way will all who draw from the well never go thirsty again.

Milk vs. MeatThe Season of Sacrifice
Scroll to top