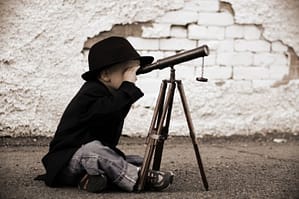 For as long as I have been teaching and writing about Yeshua, it has been primarily to a Messianic Jewish audience, knowing all the while that many Gentile ears were listening. But one thing that has boggled my mind for more than a decade has been the attraction that certain believers—both Jewish and Gentile—develop for “the Jewish (or Hebrew, or Hebraic) roots of the Christian faith.” While I perfectly understand why a Jewish believer in Yeshua would continue in faithfulness to the Torah, retaining an ethnically Jewish identity in the Messiah, I have often wondered why believers who were formerly immersed in Christianity would begin gravitating toward all manner of things “Jewish.” What motivates people to pursue Christianity’s “Jewish roots”?

And then it dawned on me: just what are the Jewish roots of Christianity? Perhaps if I asked around, I could locate them and be able to better understand the hearts and minds of my brothers and sisters in Messiah. As it turns out, what I thought to be a relatively simple question to ask was not quite so simple for others to answer. Indeed, after considering all the responses, it seems that the “Jewish roots of the faith” is actually a vague, elusive, ethereal concept that each individual is invited to envision and determine for himself. Not the results I was hoping for.

After some probing, however, I believe I have uncovered the common motivation that leads believers to want to “discover their Jewish roots,” and the common influence that has landed us in a pool of Judaistic confusion: without exception, everyone I spoke to said that they were simply seeking the truth. They felt that what they had been taught in Christianity was not primarily based on Scripture—and even when it was, the first two-thirds of the Book was almost entirely overlooked (or spiritualized away). So what does this explanation mean? It means that what people are actually looking for when they stumble upon the “Jewish roots of Christianity” is the truth of God’s Word. They are passionate about abiding by the Scriptures and doing only what the Word of God says. Doesn’t that ring true to you?

The problem, however, is that many—in their zeal—overshoot the Scriptures and plunge instead into the realm of Judaism… not realizing that there is a major difference between the two! Somehow, people have become convinced that Scripture requires an assistant or interpreter, and that the collective traditions and teachings of Judaism (or a subjective, selective, “messianic” conglomeration of them) is the authentic, reliable prism through which the truth can once again be seen. My brother, my sister—this is not the truth, but a lie! You aren’t looking for the “Jewish roots” of your faith… you’re looking for the truth of the Scriptures, and you’ve run right past it!

There is no wisdom, spiritual insight or mystical secret that Judaism (or any other traditional institution, or any so-called “new revelation”) can supply that will shed light on the plain instructions of God’s perfect Word. If you feel robbed or duped by unscriptural teachings, the solution is not to look to ancient Judaism—the answer is to read your Bible! The truth hasn’t been hidden from you because it’s Jewish; it has been omitted because men hide themselves from the intense, revealing light of the Word of God.

My friend, devote yourself to the truth of the Scriptures… certainly, they are Jewish; but most importantly, they are all you need.

This “Word from Kevin” was previously published in Messianic Jewish Issues.

Restoring the Context of TorahNew Book Release: Bearing the Standard
Scroll to top