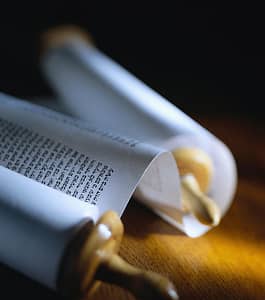 One of the major criticisms levied against the Messianic Jewish movement is that it allegedly causes believers to go back “under the Law.” Unfortunately, while much of our purported Torah observance is barely more than a superficial emulation of rabbinic Judaism, the accusation is not far from reality in some circumstances. Indeed, as the more militant among our ranks swing to the extreme with their versions of Torah observance, it becomes the very legalism they vehemently swear to oppose. The practices and propaganda of many independents, fringe elements, and those in pseudo-Messianic movements have also been cause for alarm within the larger Body of Messiah. Therefore, restoring the Torah to its proper context ought to be of paramount concern for the Messianic Jewish movement.

It will suffice to assert that it is incumbent upon Messianic Jews (and the Gentiles who sojourn with us) to honor and embrace the covenant of Israel’s national distinction, the Torah. It is no longer sufficient for each believer in Yeshua—Jew or Gentile—to approach Torah individualistically, hyper-spiritu­ally, nonchalantly, legalistically, or any other way that is neither “good” nor “lawful.”

The keeping of the commands of Torah must be approached as Adonai’s means to an end—not the end itself—and that end is the restoration of the Jewish people to our covenantal calling as a light to the nations (see Deuteronomy 4:6ff, Isaiah 41:8, 42:1-6ff). While the Messiah Yeshua is the fullness of God’s plan for global reconciliation, Israel continues to hold her central and irrevocable position in His purposes… and at the center of Israel’s identity is Adonai’s Torah—both written, and written on her heart—calling her to return to the covenant in order to complete the task she was first and forever set apart to do.

The restoration of Torah begins with the simple premise that the written word should always be considered first in its original context, and last for its spiritual application. The following list, though far from comprehensive, enumerates a balanced beginning to a productive and fruitful approach to the Torah.

Consider first the national context of a given passage of Torah. How is the passage speaking to the nation of Israel as a whole? What effect does obedience or disobedience have on the entire nation? Are the commands tied to Israel’s occupation of the Land?

Second, what impact should the passage have on communal life within Israel? How are neighbor-to-neighbor relationships affected? How does adherence to or ignorance of the passage build or destroy the life of a community?

Third, how should an individual living among a united, restored Israel respond to the passage? What is his responsibility? How is he being practically instructed to think and behave?

Fourth, consider how the instructions of a given passage translate to community life in dispersion. Can the commands be fully upheld? Partially? What should be our attitude toward commands that are unkeepable in our presently dispersed state? Can or should we be creative in our solutions to overcoming any obstacles to Torah-keeping?

Fifth, what is our individual responsibility to the commands of Torah while in dispersion? How can we contribute to the building of our communities in spite of our dispersed condition? If community consensus is lacking, can we still honor the commands on an individual basis?

Last, in light of all of the above, contemplate the spiritual application of the passage. How does the “doing” of the command affect us spiritually? How is the command fulfilled in Messiah? What is the best way for Messianic Jews—individually and communally—to understand and apply the passage? What, if any, is the broader spiritual application for all believers in Yeshua? How does it instruct, reprove, correct, or disciple us in righteousness?

By approaching the Torah in this manner, we will be able to consistently view it in its divinely given context: the constitutional covenant for a united, distinct nation of Israel—in the Land, under the direct headship of Adonai our God. With this filter, we are better equipped to apply the Torah in our presently limited circumstances—dispersed among the nations, lacking in our communal identity—and begin to regain the perspective needed for Messianic Jews to enter into the fullness of our calling as covenantally faithful Israel.

What do you think? Is this the proper approach to Torah? Sound off below.