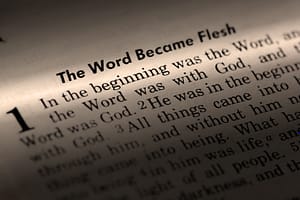 Q: Dear sir, I have been a Bible-believing Christian for over twenty years. Lately, my brother has been debating with me that Jesus has all the qualities of a Savior and that He is the only way to be saved, but says that He was not God incarnate, but only the Son of God. Do all messianic Jews believe this? Could you please give me detailed information as to why, either way? Is Jesus Christ God incarnate, or not, according to Messianic belief? Your time spent in replying to me would be very much appreciated!

A: Thank you for your very important question. In my experience, mainstream Messianic Jews—myself included—agree with the Scriptures: Yeshua is God in the flesh. Though never taking away from the fact that He is also fully human (see Acts 2:22, 13:23; Romans 5:15; 1Timothy 2:5 and also perfectword.org/humanity), the Scriptures speak several times of the Master’s deity.

The most detailed account of the “incarnation” is found in the first chapter of John, which opens, “In the beginning was the Word, and the Word was with God, and the Word was God” (John 1:1). We should immediately notice that by using the phrase “in the beginning,” John is purposely drawing a parallel to Genesis 1:1, which begins the Scriptural creation account. This is a logical connection, since all throughout Genesis 1, we hear God speaking (“and God said…”), and creation coming into existence through His Word. John further links the Word with creation in John 1:3, saying, “all things came into being through Him, and without Him, not even one thing came into being that has come into being.” So John clearly establishes that in the beginning the Word was creating all things with God and as God.

With the Word’s origins firmly established, John then goes on in verse 14 to say that at a specific point in human history, “the Word became flesh.” To become flesh is to say that He became a human being. Indeed, having been miraculously born to a woman (see Luke 1:31-35), He has a human lineage (see Matthew 1:1ff and Luke 3:23ff), as well as a natural family (see Matthew 13:55-56 and Mark 6:3-4).

The question is, if the Word “was God” in the beginning, was He still God after He “became flesh”? At minimum, John implies this in verse 15, when he reports that Yochanan the Immerser—who was born before Yeshua (Luke 1:24-37)—said, “He existed before me.” Yochanan recognizes the Word as a man, yet ascribes eternal quality to His existence. Indeed, it is this very man whom Yochanan acknowledges is the Messiah Yeshua (see John 1:29-30, cf. John 17:5).

So, according to John 1, the Word was God, He became the man Yeshua, yet retained the eternally existent nature of God.

Paul describes Yeshua’s mysterious dual nature in similar detail in Philippians 2:6-12. In becoming a man, Yeshua “made Himself nothing” and “humbled himself;” and yet, at the name of Yeshua, “every knee will bow… and every tongue will confess that Yeshua Messiah is Adonai” (cf. Romans 10:9)—that is, He is yhvh, the Lord… God! On what grounds can we reach this conclusion? Paul’s language clearly alludes to Isaiah 45:18-23, which says in part, “I, Adonai… there exists no God except Me…. To Me, every knee will bow, every tongue will swear [allegiance].” While maintaining the paradoxical tension between Yeshua’s humanity and deity, Paul implies here that Yeshua will share in the allegiance due only to Adonai, because He Himself is God.

Such an understanding is hardly a departure from Paul’s other teachings on the subject. In Colossians 1:15-17 he calls Yeshua “the image of the invisible God,” and reiterates Yeshua’s first role as Creator, while affirming His continuing role in holding all things together. But it is in verse 2:9 that Paul makes one of his boldest statements regarding Yeshua’s divine nature, declaring that “in Him dwells all the fullness of the Deity bodily.” So Paul, like John, upheld Yeshua’s unique nature as both man and God.

To affirm, then, that Yeshua is the Son of God while also asserting that Yeshua is less than God is inconsistent with the Master’s own understanding of His relationship with the Father. According to the testimony of Scripture, to call oneself “Son of God” was no less than an overt claim to Deity—a claim which, if untrue, was considered blasphemous and worthy of death.

Consider that, according to John 5:18, “the Jew[ish authoritie]s were seeking [all] the more to kill Him, because… He also called God His own Father, making Himself equal to God.” In John 10:22-31, Yeshua said, “‘I and the Father are one,’ therefore, again, the Jews took up stones [so] that they could stone Him.” In John 10:32-33, the Master asked why they wanted to kill Him, and they replied, “Because you, being a man, make yourself [out to be] God.” And in John 19:7, “the Jews answered [Pilate], ‘We have a law, and according to our law, [Yeshua] ought to die, for he made himself Son of God.”

Despite their disbelief, the Jewish authorities were not misunderstanding Yeshua’s claims. On the contrary, Yeshua asserted His eternal existence and deity in unmistakable terms in John 8:56-59, when He said, “Before Av’raham’s coming [into existence], אֶהְיֶה, eh’yeh (I am).” This is a plain reference to God’s revelation of Himself to Mosheh in Exodus 3:13-14: “And Mosheh said to God, ‘…What is [Your] Name?’ …and God said to Mosheh, אֶהְיֶה, eh’yeh (I am)….’” How do we know that the Master meant to draw this inference? It should be obvious from the peoples’ response: “Therefore, they took up stones, that they might throw at Him….”

The Master Yeshua did not repeatedly rile up the Jewish crowds with purposely misleading claims of deity in order to facilitate a martyrdom based on false pretenses. On the contrary, it was His very truthful claims to deity which ultimately gave the Jewish authorities the ammunition they needed to bring about His unwarranted conviction, sentencing, and death. Though Scripture does not overemphasize Yeshua’s deity—and certainly not at the expense of His equally real humanity—it is nevertheless essential to the Master’s character, as well as a clear teaching of Scripture.

As the writer proclaims in Hebrews 1:3-10, Yeshua is “the [exact] imprint of [God’s] substantial existence; sustaining also all the things by the spoken word of His might…. [God says] to the Son, ‘Your throne, O God, is to the age of the age…. You, at the beginning, Master, laid the foundation [of] the earth, and a work of your hands are the heavens.’” The man Yeshua the Messiah is also the Son of God—indeed, He is Adonai in the flesh. What else can we say but echo the doubting disciple’s confession: “My Master, and my God!” (John 20:28)

The Promise Kept: Irrefutable Proof of GodIntroduction to Bible Translations
Scroll to top