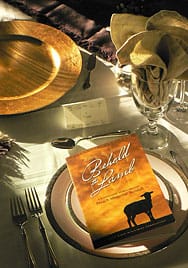 Since the days of my youth, I have attended many different seders, both in homes and large groups. Some time after I became a believer in Yeshua, I learned of the Messianic Passover Haggadah from Lederer Publications, and Passover finally began to have meaning for me. My heritage as a Jew became reinforced in a way that had not happened during my youth. Needless to say, I greatly appreciated the Messianic Passover Haggadah, and rejoice in the many others that Messianic Jews all over the world continue to develop to this day. END_OF_DOCUMENT_TOKEN_TO_BE_REPLACED 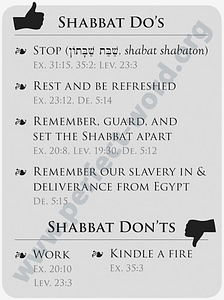 The seventh-day Shabbat (Sabbath) is not only central to Israel’s calendar, it is at the heart of Jewish identity. Exodus 31:13 reports Adonai commanding Moshe to “speak to the sons of Israel, saying, ‘Surely, My Shabbats you must guard, for it is a sign between Me and you, to your generations, to know that I, Adonai, am sanctifying you….’” Yet the observance of Shabbat has historically been shrouded in rules and customs that can separate us from the very Shabbat we are supposed to be protecting. Beautiful, elegant—some-times strict—and infused with spiritual symbolism, the Shabbat traditions of Judaism nevertheless (and unnecessarily) complicate what may arguably be the simplest thing in Scripture.

While the practical out-working of Shabbat in the modern Diaspora does take some amount of forethought, the principles set forth in the Scriptures are easy to understand and apply—if we will only hear them. Indeed, wedged in our thinking is the belief that Jewish religion and culture supercede Scripture, and that centuries of practice amount to expertise. Not necessarily.

“How do I ‘do’ Shabbat?” is the question that kills Shabbat even before it begins. Candle-lighting, Shabbat dinner and special prayers are nice, but not what this holy day is all about. To “do” Shabbat, first consider the Scriptures (see image, above), and start by simply stopping. Don’t worry about going wrong with the way you “do” Shabbat… as long as you’re not going at all…

(Other extra-Torah or land-dependent Shabbat prohibitions include carrying a load out of one’s house or in through the gates of Jerusalem (Jer. 17:21-22), and buying from non-Israelites who are trying to do business in Jerusalem (Neh. 10:31, cf. 13:16). There are also explicit commands for Shabbat sacrifices. As for assembling for the purpose of worship, the Shabbat itself is a sacred assembly (Lev. 23:3), but what constitutes assembly, where, and of whom is not stated. Assembly of at least some members of Israel at the Tabernacle/Temple may be implied by Numbers 10:2&10.)

When I was a boy, one of the only Jewish holidays my family celebrated was Chanukah (the other was Passover), but if you had told me that one day I would write an entire book about the Festival of Lights, I would have said you were a couple of candles short of a menorah! Now all these years later, I’m delighted about the newly released “Real Story of Chanukah,” because it truly puts the modern holiday in perspective by placing it against the backdrop of its factual history.

But what really excites me about the new book is that its message is so Messianic… not because it shows you Yeshua in the chanukiyyah, but because the real story of Chanukah is about being completely sold-out, zealous, crazy-on-fire—dedicated—to Adonai. I love this kind of message!

In The Real Story of Chanukah (which quotes at length from the apocryphal, yet historically reliable books of 1&2 Maccabees), we get to witness the struggles of a handful of average, everyday Jewish people during the intertestamental period. Against the overwhelming anti-Semitic and assimilating forces of their day, we see these valiant, devout few as they fight for the God and the Torah they love, in order to restore Israel to faithful fellowship with God. The story is just incredible—it’s vivid, moving, and, at times, almost beyond belief. And it’s within this context that I was able to unpack the Messianic message, illustrating how, according to the Scriptures, we too can and must be completely dedicated to the cause of Yeshua.

END_OF_DOCUMENT_TOKEN_TO_BE_REPLACED

I would like to share a recent exchange I had with one of our enews subscribers who questioned the manner in which we determined the date of Passover this year. A little background for those of you unfamiliar with the nature of the debate: it centers on the reliability of the established Jewish Calendar versus the observation of the phases of the moon, the sun and the agricultural state of the Land of Israel as opposing systems for accurately determining the dates of Israel’s calendar. This is an important issue because the dates of the calendar practically affect when to celebrate the year’s annual appointed times, such as Passover.

Our enews letter read in bold letters: “Only 2 weeks to Passover!”

But with the voice of God sounding so loudly throughout the bulk of Scripture, His “silence” in the book of Esther rings ever so conspicuously where the authoritative establishment of Puriym is concerned. Indeed, it is absolutely clear from the text that Adonai in no way authorized and implemented Puriym as a feast to be kept by Israel. Rather, it is a self-appointed time of celebration—much like that of Chanukah, another self-proclaimed feast which commemorates Israel facing and defeating a similar foe. In the end, there can be no argument that Mordechai and the Jews in Persia unilaterally imposed the annual celebration and memorial of Puriym upon their descendants forever—an appointment which was never explicitly sanctioned by Adonai. How, then, are we to handle this precarious—and somewhat presumptuous—command, which has been preserved for us in the context of Scripture? END_OF_DOCUMENT_TOKEN_TO_BE_REPLACED